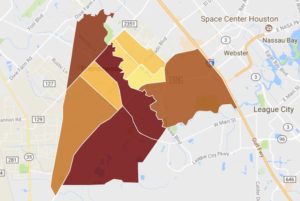 Friendswood is a medium-sized city located in the state of Texas. With a population of 38,800 people and nine constituent neighborhoods, Friendswood is the 85th largest community in Texas.

Friendswood is a decidedly white-collar city, with fully 87.86% of the workforce employed in white-collar jobs, well above the national average. Overall, Friendswood is a city of professionals, sales and office workers, and managers. There are especially a lot of people living in Friendswood who work in management occupations (15.93%), sales jobs (12.13%), and office and administrative support (11.81%).

Also of interest is that Friendswood has more people living here who work in computers and math than 95% of the places in the US.

Friendswood is a good choice for families with children because of several factors. Many other families with children live here, making it a place where both parents and children are more likely to develop social ties with other families. The city’s good public school district and large population of college-educated adults provide an environment conducive to academic success. Many people own their own single-family homes, providing areas for children to play and stability in the community. Finally, Friendswood’s overall crime rate is lower than average for the country.

Friendswood is a very ethnically-diverse city. The people who call Friendswood home describe themselves as belonging to a variety of racial and ethnic groups. The greatest number of Friendswood residents report their race to be White, followed by Asian. Friendswood also has a sizeable Hispanic population (people of Hispanic origin can be of any race). People of Hispanic or Latino origin account for 14.84% of the city’s residents. Important ancestries of people in Friendswood include Irish, English, Italian, and French.  The most common language spoken in Friendswood is English. Other important languages spoken here include Spanish and Vietnamese.

Signup To Save Your Search Items

Craig is the Team Leader at Craig Carver Group and has been in the real estate business since 1994, he is a Top Producing agent for RE/MAX. Whether buying or selling a home he is here to make the process as stress free as possible and to ensure that you have the best experience buying or selling your home. Craig really cares about the community and is always happy to help his clients. The market is always changing just like the ever-changing needs of his clients and Craig is always up to date on the latest technology and marketing tools to get your home sold as quickly as possible. Choosing Craig Carver as your agent is the right choice, call us today!
Meet The Team